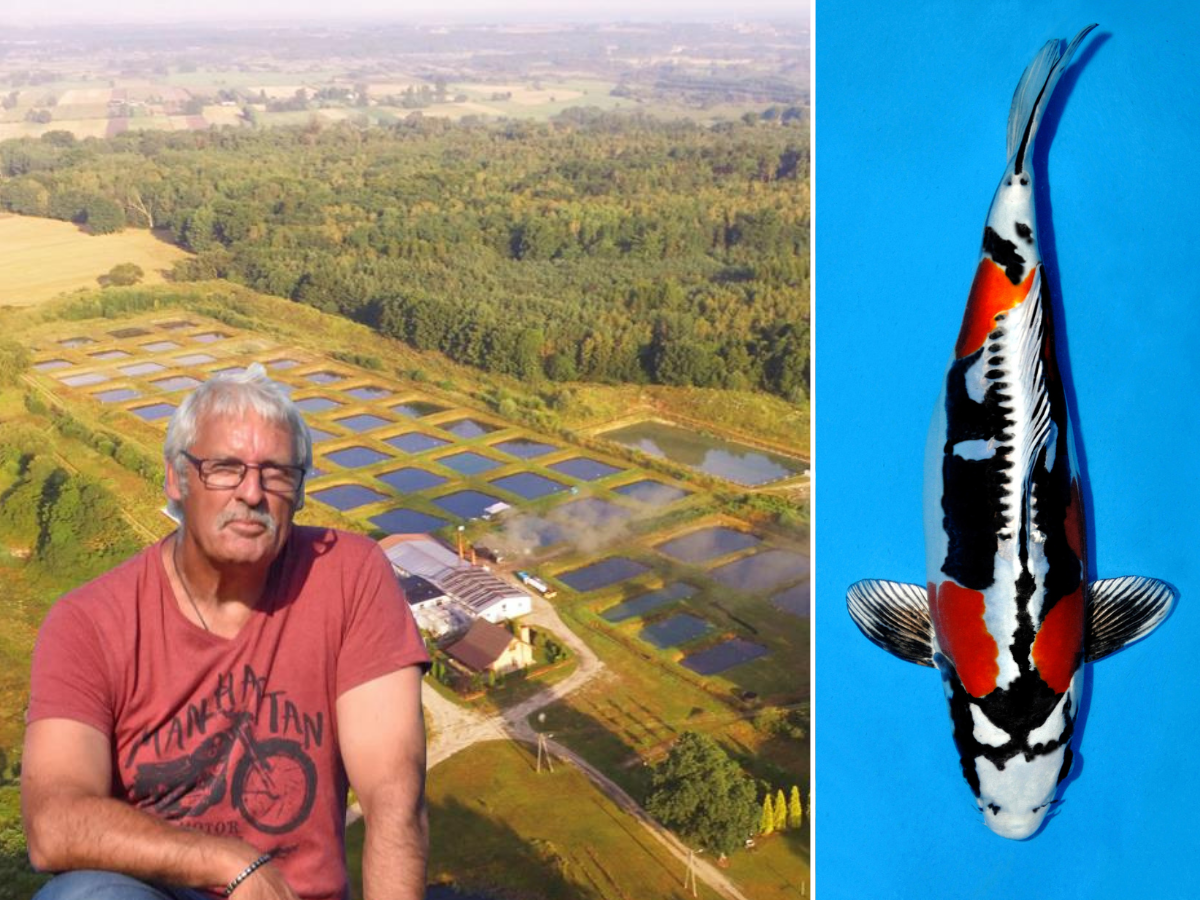 Several years ago Chris Wall from Koi Talk was trawling the internet, looking at Koi videos, and he came across a Doitsu Showa that stopped him in his tracks.

It featured a truly unique style of Doitsu Showa that had some astounding attributes that you do not see in many other Koi of this breed.

On further investigation he wanted to see what farm the Koi came from, thinking it must be from a new line in Niigata, he came across the name Yoshikigoi. Chris could not place the name and knew it was not a farm in Japan, but was gobsmacked to learn that this Koi was produced in a place called Chochim in Poland!

Being the curious boy that he is, Chris couldn’t help but delve further into the farm and found that it was generating multiple award-winning Koi in Europe. Following that, it wasn’t long before he contacted the farm directly, and soon afterwards had booked his flights and was on his way to Poland. It was the start of what would develop into a great friendship, the first shipments into the UK were arranged and soon followed by multiple trips to the farm with clients.

The farm is unique for many reasons, notably for its unique varieties such as Doitsu Ochiba, Beni Kikokuryu, Doitsu Ki Kujaku, Doitsu Atarashi Ochiba, and many more. It is the largest Koi farm in Europe and is the only farm to hold the accreditation of being SVC and KHV free which is a flagship status for the farm’s success.

The farm is run by Jos Aben, someone Chris is happy to say has become a very good friend and someone he admires hugely for what he has created and achieved in the face of adversity. With plaudits from the late Peter Waddington and Mark Gardner, the farm has risen in stature and now produces a staggering 8-10 million Koi per year, making it one of the largest farms, not just in Europe, but in the world. Chris has spent many evenings talking Koi with Jos and listening to his lectures, he is deeply passionate about Koi, and the values that he and the whole farm team want to uphold. It was on one of these trips that Jos told Chris the story of this Doitsu Showa that had initially caught his eye all those years ago. It was a truly fascinating insight, and quite honestly, a moment of Nishikigoi history. We thought it would be great to relive these moments, so Chris caught up with Jos to hear all about this famous Koi.

Chris: Hello Jos. Can you tell me about the first time you identified this Koi as being something a bit special, and what made it stand out to the rest of the Koi at such a small size?

Jos: When I saw this fish doing selections out of the mud pond, it was 3-4cm in size. At that time, I told my business partner, Ernest, that this was going to be a great fish. I was really, enthusiastic about this Koi because of the skin quality it already had at such a young age, the lustre and the shine, shape of the body, just everything about it made it stand out, even at such a small size. I told Ernest that if this fish goes on to develop in the way I think it will, it will be a show fish that will win many, many awards.

As jumbo Tosai I showed this fish to many customers, to show people that this is what special Koi look like when they are young, and it is something unique. It already had the black pattern, that was completely free and surrounded with white pigment. It did not change too much from a small fish to jumbo Tosai and even onto nisai, sansai and yonsai, you can see some sumi developed but the majority of the pattern just became enhanced with age. I took all the photos, and, on the internet, it was often remarked that Koi like this couldn’t be real and the photo had been photoshopped as a Koi like this didn’t exist.

That was the time when I decided to bring this Koi to the Koi show, as sansai, just to show people that the Koi was real and that it was not photo enhanced or edited. This is when the world learned that this was indeed how the fish looked and this Koi was real, and that ended the rumours about us changing the appearance of the Koi.

The Koi eventually became so well known that she became our logo – she was our flagship Koi and even all those years ago she went viral! She became the fish that made us known all over the world. She continues to do this, even now you still see these photos popping up on Facebook and forums when they talk about Doitsu Showa! Our other varieties that often get mentioned are Doitsu Ochiba and Beni Kikokuryu, but the one that the media always talk about and consider to be one of the best produced is this Doitsu Showa.

Chris: Having bred this Koi and identified it at such a young, how did it feel to see it come to fruition? After all, many people say this is a good Koi, but how many can make such statements and follow through years later.

Jos: The joy of watching a Koi like this in development is what being a Koi breeder is all about for me. Breeders often say that one Koi (or maybe if you are lucky two or three) a year make your entire career worthwhile, and this is why we do it. When Koi of such exceptional quality are produced, you can’t help but be proud that they have emerged from your own ideas and pairings. Often with Koi breeding, it is not an exact science and things change. A Koi like this makes all the effort, the long days, the time away from home – my wife and family – so much more rewarding as it is a reflection of my life’s work.

Chris: How did she perform on the Koi show scene?

This Showa only ever went to one show, but it won everything!

This was in Arcen (Holland) but after that, we never placed her in a Koi show ever again because I never like to do this. With ALL of our Koi that go to Koi shows we only ever take them once, I don’t like to take the same fish year in year out. It was just one time simply to show people what this Koi was about, and that it really existed, and it was not photoshopped in any way at all. That’s the reason why I decided to place it into the Koi show in Holland.

Chris: What is the Showa currently bringing to the farm? From memory, she was used as part of the breeding programme.

Jos: Sadly, she died a few years ago due to some internal problems so she is no longer with us. However, her memory lives on, and people still talk about her all the time or whenever they see our logo. As you can see through the development in the photographs, she really did develop in the perfect way, not just pattern but skin, body, balance – she had it all.

As you can see through the development in the photographs, she really did develop in the perfect way, not just pattern but skin, body, balance – she had it all.

After the show she could not come back to the farm because of the strict licensing that Yoshikigoi operates under in order to maintain our KHV and SVC free status. We had to take her to my farm in Holland and I did attempt some spawning’s from her, but what I wanted out of the spawning never came to reality. She was not a breeding Koi in the way I thought she might be, but that is Koi breeding for you.

To create a fish like this where the pattern isolates itself in the way it did was completely individual, and it could take decades to produce another Koi like this

She was truly something unique and special in every aspect. To create a fish like this where the pattern isolates itself in the way it did was completely individual, and it could take decades to produce another Koi like this, if at all. To produce even just 20 like this from a spawning is not something you can easily do – it could take another 20 years before this happens again or it could be next year, you just cannot tell. This is the excitement of Koi breeding and the challenges that I as a breeder must face.

This Koi was developed using Beni Kumonryu x Doitsu Showa so she had influences from both varieties, both of which were displayed in her unique qualities. The reason I chose this pairing was that I wanted a more stable Beni Kumonryu (Beni Kumonryu are notorious for fluctuating patterns, making them difficult for breeders to invest time into as they struggle to predict how the Koi will turn out) and I wanted a Showa that had a deeper black, almost an inky kind of black pattern. This pairing worked out really well. All the Beni Kumonryu you now see produced on our farm are from the same line and the same parents that this Doitsu Showa came from, they have real depth and stability at the heart of their production.

Coming up in a Future Issue of Koi Talk

In a future issue of Koi Talk magazine we plan to feature a more detailed interview about Yoshikigoi Koi Farm and how it performs as one of the biggest Koi breeding operations on the planet.

If you get the chance to visit the farm or see one of the many lectures Jos does around Europe, we would very much encourage you to go and immerse yourself in his knowledge and develop your skills as a Koi hobbyist.